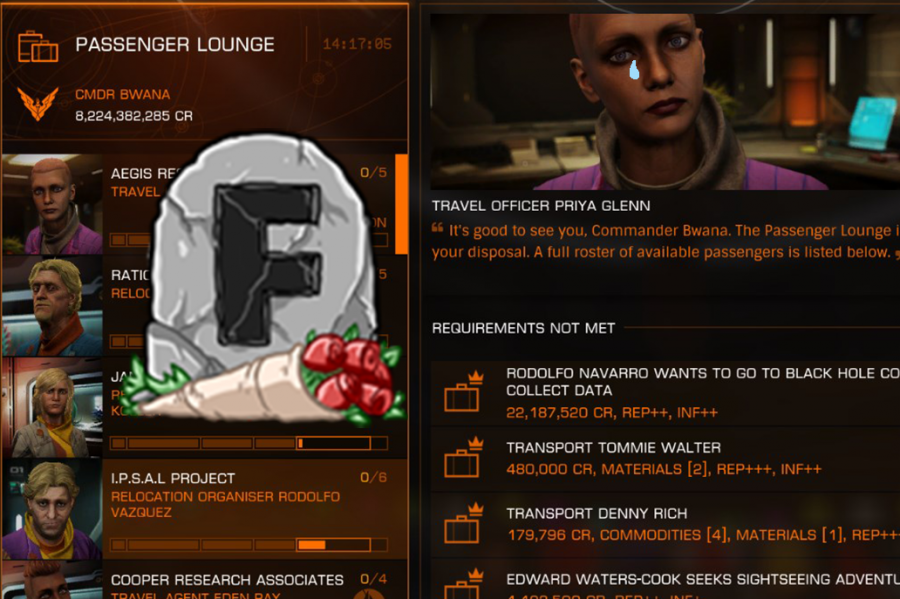 Oh no. Frontier has nerfed long range passenger missions and the precious opulence is under fire. Well, I've been trying to inform the masses on my twitch stream, that this was bound to happen based on history. Remember Seeking Luxuries? Robigo? Sothis/Ceos? Quince? Massacre Missions? Yeah, all nerfed now, but were great sources of Elite: Dangerous credits back in their prime.

So, now what do you do Commander? Until the next loot cave emerges, here are some common credit making techniques that I've come across in my travels across the universe:

Old faithful. Back in year 1 of Elite: Dangerous, trading was top dog for credit making. Not much has changed in the realm of trading in Elite: Dangerous, but if you have the right tools, it can yield a good amount of credits. I highly recommend eddb.io for finding lucrative routes for your vessel. First off, what should you fly? Here are some suggested builds based on your available credits:

You've picked a ship, but you now need a trade route. The best of the best is Imperial Slave trading. I know, it sounds ugly, and some players won't touch Imperial Slave trading, but it is the absolute best trade money in the game. If you don't want to touch Imperial Slaves, use eddb.io to find a good earning trade route. EDDB offers several options such as trade loops, single trade routes, and Multi hop routes. If you're just starting, I would recommend using the "Loop Trade Route" option. Be sure to exclude slaves if you don't want to trade them. Pay attention to Pad Size, Max Price Age, and Distance from the jump star. Here are some recommended filters to get started with:

Note, this filter excludes Imperial Slaves, so adjust as needed. The resulting trade results will be sorted by profit. Simply choose one, turn on Netflix, and space truck the goods! Watch the credits roll in!

If you want to pew pew and make credits, then Bounty Hunting is for you. Bounty Hunting is a great activity (and arguably the best) to perform while in a wing with your friends. It is highly encouraged to find some fellow commanders to hunt targets with. If you've never bounty hunted in Elite: Dangerous, you scan NPC pilots to see if they are wanted. If they are, you blow up their ships and collect the bounty on their heads.

So how do you get started? Of course, you'll need a ship. Here's some choice beginner builds to select from. (These are combat ships and will likely have terrible jump range. You will likely have to tow (ship transfer) your ship to the desired location)

Note: None of these builds have the Kill Warrant Scanner equipped due to the incoming nerf to the device. If you want to continue using this anyway, just modify the build accordingly.

Next, bookmark this wonderful site that will search for Resource Extraction Sites (RES) nearest you. I recommend you avoid soloing Hazardous RES until you get the hang of the ship you're in. Tow your favorite combat ship there and rake in the credits!

Is that a typo? LOL. Seriously, Exploration can bring in good credits now due to buffs by Frontier. The most popular exploration method is Road to Riches. (alternate dynamic tool) The Elite: Dangerous player base has collected several systems that pay well based on their planet types and stars. You essentially fly though these systems, scan what you're told to scan, and get paid when you sell the data. The beauty of Exploration is that it doesn't take much credits to get started. Here are some decent starter fits:

I'm sure there are many more builds out there, but these will get you started. Use the utility sites to find the Road to Riches locations, scan the money making bodies, and then turn in the data for nice credits!

Periodically, Frontier will introduce Community Goals (CG) to the game. These tasks instruct to collaborate with other commanders to reach a common goal for a reward. The most common CGs are for Bounty Hunting and Trading. Use the above fits for each and participate in the CGs and earn credits two ways! Firstly, by performing the tasks (Bounty Hunting or Trade) and then receive a fat paycheck at the end of the CG.

Bonus: Get Palin Missions Back

This not necessarily a way to make credits in the game, but it can bring back a great way to do it: Palin missions. Recently, Obisidian Orbital was attacked by the Thargoids and removed the ability to perform Professor Palin's tasks. The station is currently (as of this post) under a state of "repair". Commanders can assist in repairing the station by hauling commodoties to the station in Maia. If you're not sure what to bring, check Galnet for the up to date status of the stations that were attacked.

Once this station comes back online, Palin missions should return, but it's not guaranteed. Palin missions were a good source of credits before the attack, so if you want another method, consider assisting the effort to repair.

So don't get upset that passenger missions were nerfed by Frontier. There are still ways to make credits (not stupid credits as with passengers) and you should still bring in a fair amount until the next loot cave emerges.